The foundation’s net assets have nearly doubled over the past decade to $12.7 million and the dollar amount of scholarships awarded has tripled to $371,663. 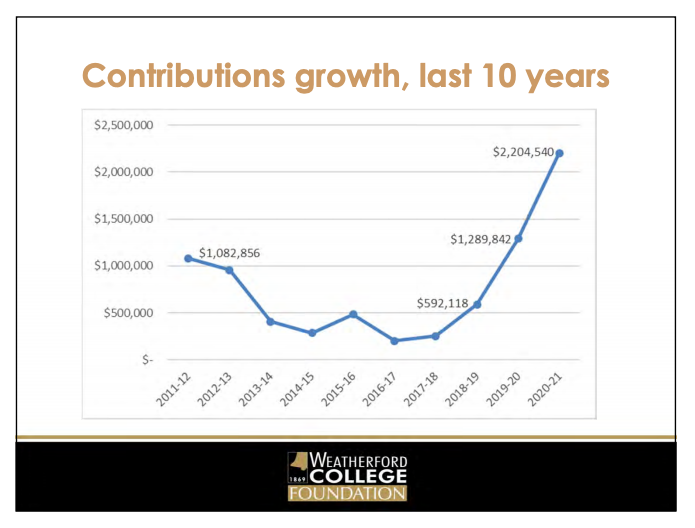 Baker credited much of the additional cash flow into the foundation to the volunteer efforts of WC Foundation President Bob Glenn. Since he began campaigning for endowed scholarship donations in the spring of 2019, Glenn has acquired 52 new scholarships totaling more than $500,000.

“The donors have been outstanding in their generosity,” Baker said. “Not only are our existing donors being more generous than ever before, we now have many new donors.”

Scholarships from endowed donations are funded from the interest of the gift, meaning the donated funds will remain for generations to come, Baker said. The minimum gift for endowments is $10,000, and donors may spread that gift over as many as five years.

In other business, the board voted to allow General Counsel Dan Curlee to negotiate with Sunrise Partners regarding the sale of college-owned property in Aledo. Sunrise had the winning proposal from among four companies.

WC bought the 34-acre piece of property years ago as Aledo ISD purchased an adjacent parcel of land for a future high school. AISD is now building a middle school on the site, so the property no longer fits WC’s plans.

In other business, the board: