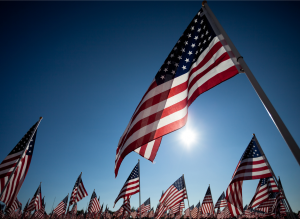 Weatherford College will commemorate Veterans Day with a ceremony at 10:45 a.m. on Thursday, Nov. 11, in the Ed Kramer Veteran Memorial Flag Plaza.

This year’s guest speaker is WC criminal justice alumnus Officer Matthew Brazeal. He is an Army combat veteran and currently works with the Fort Worth Police Department.

Texas Governor Greg Abbott presented Brazeal with a Star of Texas Award in 2021 after he was seriously injured in the line of duty in June of 2020. Brazeal was preparing to place drop sticks on Loop 820 to stop a stolen SUV that was running from police when he was hit by a car.

Brazeal attended WC from 2010 to 2012 and transferred to Tarleton to complete his bachelor’s degree. He was a student in Springtown ISD when WC’s President Tod Allen Farmer worked in the district. Farmer said, “Matt had a magnetic personality even as a young man.”

The public is invited to attend.