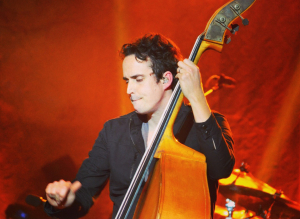 His band has the word ”little” in its name, but John Thomasson’s role in their success is anything but small. The same could be said for his career in the music industry.

Thomasson, who attended Weatherford College from 1987 to 1989, is the bandleader for popular country music artist Little Big Town. He’s been with the Nashville-based group for 11 years.

“I am in charge of the backing musicians, quality control, running rehearsals, and the hiring of musicians,” Thomasson explained. “I am also the liaison for Little Big Town with outside collaborations. I have worked with the Boston Pops, making mock string and horn arrangements for professional arrangers and the guest artists that we collaborate with from time to time.”

Thomasson decided to move to Nashville in 2010, about six months before he started working with LBT. He was based out of Austin for almost 20 years before that.

“I had my first son, and I knew I had to move to LA or Nashville so I could make more money to support my family,” he said.

He and Little Big Town are certainly making money now as he has helped them earn tremendous national and international success with hits like “Better Man,” “Girl Crush” and “Pontoon.” The group has won four Grammy Awards, nine CMA (Country Music Association) Awards and many other accolades.

Thomasson is versatile with his musical talents. His primary instrument is the bass guitar, but he can also play symphony-style double bass, six-string electric guitar and even keyboards.

While he tours, he also does session work around Nashville, including a lot from his home with performers worldwide. Along with Little Big Town, he’s worked with some huge names in his career, including Gladys Knight, Luke Bryan, Allison Krauss, Sheryl Crow, Kacy Musgraves, Miranda Lambert and Billy Currington.

He also played with San Francisco singer/songwriter Matt Nathanson for six years before moving to Nashville and was part of his biggest hit, “Come on Get Higher.” And he toured with another California singer/songwriter named Brett Dennen.

“I played on several Matt Nathanson songs that I always hear in grocery stores and coffee shops. ‘Come on Get Higher’ was a sleeper hit that is multi-platinum and my first successful recording,” he said.

As for writing songs himself, Thomasson said, “I have written some instrumental music, but I have never really cared for traditional songwriting.”

“I had plans to get my Ph.D. in cognitive psychology with an emphasis on musical cognition,” he said. “I started getting good national touring gigs while I was applying for grad school, and I sort of fell back into music, and I haven’t looked back.”

Thomasson said his time at WC and playing in the WC Jazz Band helped him settle into what he wanted to do at his own pace.

“It gave me time to play good music but also to think about things at a slower pace,” he said. “The big band has always been based around Count Basie, so there is some tradition and discipline that goes with that style.”

Thomasson is excited to now be on the advisory committee for WC’s upcoming Audio Engineering Program.

“It will be a fantastic environment, and I feel that it is in great hands with Duane Durrett and my long-time friend Fredrick Sanders,” Thomasson said.

Thomasson’s mother and grandmother both played piano; however, no one in the family considered playing professionally. But Thomasson was determined that music was meant for him. That led him to attend Booker T. Washington High School for the Performing and Visual Arts in Dallas.

“You have to be dedicated and stubborn to be a musician. I don’t know if I have the most talent, but I have those two other qualities,” he said. “I knew I wanted to do this when I was about 12 or 13, but I knew that I had to do it by my junior year in high school.”

And now that the entertainment world is opening back up, he is pretty busy.

“Things are ramping back up post-COVID with Little Big Town, and I am still pretty busy with online and in-town session work. I am thinking about other things that I want to do after touring. I don’t want to tour forever or miss much more time as my kids grow up,” he said.

“It has been a great run, and I have crossed off so much of my bucket list as a performer in my journeyman career. I am comfortable doing cool things but hanging out in the background. I guess you have to be that way if you are a bass player.”