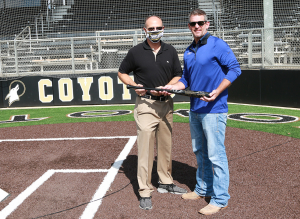 Imperial Construction has made a generous contribution to the Weatherford College Foundation for the “Fields of Dreams” campaign to outfit Stuart Field and Roger Williams Ballpark with artificial turf. The Stuart Field first base dugout will be re-named the “Imperial Construction Dugout” in honor of this gift. Pictured is WC President Tod Allen Farmer presenting a bat signed by the WC softball and baseball teams to Imperial Executive Vice President of Operations Jon Jones.