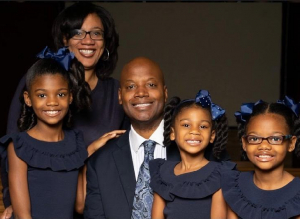 Claude Cummings knows a thing or two about assists on a basketball court and about receiving them in daily life.

Now, the former Weatherford College Coyote (1991-94) has devoted his time to helping others navigate through their challenges.

“I would not have the life I have today if it were not for Weatherford College,” said Cummings, who is now manager of employment development with the Harris County Community Supervision Department (HCCSD). He’s also the pastor of He Heard My Cry Christian Fellowship Church (HHMCF), a non-denominational, multi-ethnic church in northwest Houston.

“My team and I assist individuals who have been previously incarcerated, or individuals under court supervision, obtain the resources they need to be productive members of society,” Cummings said of his work with HCCSD, which goes hand-in-hand with the mission of his church in bringing the best life, physically and spiritually, to as many as possible.

Cummings remembers what it felt like to want someone to reach out with a helping hand.

In his senior year at Klein Forest High School he was diagnosed with appendicitis. Due to this, he was unable to work out for universities or colleges, and the scholarship offers he did receive were rescinded.

“Late in the spring of 1991 my head coach Larry Petrie called me and stated, ‘I have colleagues that coach basketball at Weatherford College and they want to see you work out,’” he said.

Of course, the two coaches were Bob McKinley and Mark Osina.

“I hadn’t played basketball in months, I was tired and out of shape, and at the end of the workout they told my coach I was not good enough for a scholarship but they would accept me as a walk-on,” Cummings recalled.

Eventually, he was able to earn a full scholarship and was even voted Mr. Weatherford College and was president of the WC Student Council. His hard work paid off, and he earned a full athletic scholarship to West Texas A&M University.

“Jason Hooten, who is now the men’s head basketball coach at Sam Houston State University, was the assistant coach when I played at Weatherford College. It was Coach Hooten who gave me my first opportunity to coach at Tarleton State University under Lonn Reisman,” Cummings said.

After coaching, he did a stint as an educator and administrator at Houston Independent School District, returning home to where he grew up.

“I don’t believe we choose the paths we take in life. I truly believe God chooses our path, and it’s up to us to decide whether or not we are going to stay on the path,” Cummings said of his journey.

“I thank God for putting me in the right place and introducing me to the right people, which gave me the courage and confidence to stay on the path He chose for me—including Weatherford, Texas, and the amazing staff and students at Weatherford College.”

And while COVID-19 has created a new challenge, Cummings believes that every challenge also creates opportunities.

“There are not many silver linings to COVID-19. However, I think we can all agree it challenged us to grow in unimaginable ways,” he said. “We’ve had to learn to use technology. ‘Virtual’ was not a word that many of us used often, but now it has become a permanent part of our vocabulary. Virtual meetings, virtual school, virtual doctor visits. Who would have ever thought?”

Cummings has been married to his wife, Joaquina, for 13 years, who owns and operates her own business as a baker and caterer. They have three daughters, Jillian Rae (age 9), Claire Elizabeth (6) and Laila Rose (4).

Now he’s back home in Houston, but he said he’ll never forget his other home in Weatherford.

“When I reminisce about my time at Weatherford College two words come to mind, relationships and opportunities. As a student, I met some incredible and amazing ambassadors for WC,” he said. “Because of individuals like President Boyd, Mayor Sherry Watson, Doug Jefferson and the entire Jefferson Family, Darleen Garrett, Duane Durrett, and Dr. Jeanine Irby, I came to know and love Weatherford College.

As for the future?

“We don’t know what the future holds but we have faith in God and trust Him as He leads us into the future.”