Dowd appointed to WC board 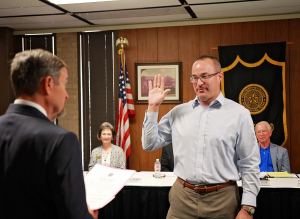 The Weatherford College Board of Trustees appointed Doug Dowd to the board in a called meeting Wednesday. District Judge Graham Quisenberry administered the oath of office. Dowd replaces Place 4 trustee Dave Cowley, who recently submitted his resignation. Dowd grew up in Weatherford, attended classes at WC, graduated from Tarleton State University and is now a vice president at Plains Capital Bank. He has a long record of civic involvement, including serving as the current president of both the Weatherford Noon Lions Club and the Weatherford ISD Education Foundation. Interestingly, Dowd’s great-great-great-grandfather was David Switzer, the first president of WC.